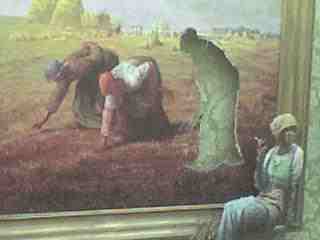 At last I finally made it to the BANKSY exhibition at the Bristol City Museum and Art Gallery to see what all the fuss was about. As an avid fan of urban graffiti, I followed the antics of this local guerrilla artist with great interest. Whether he is seen as a genius or a vandal his controversial eye catching urban art and covert antics have certainly caught the world’s imagination. Armed with his trademark stencil work and imagery combined with clever re-imagining of classic art and lifelike animatronics, BANKSY has struck again.

Everything about this local artist screams cleverness, from the enigma surrounding his identity (man, woman, more than one person?) to the varied and sometimes conflicting styles of his work which has everybody asking one other question; is this art?

Very few artists can make you laugh and shock you at the same time. BANKSY’s satirical illustrations fused with political and sociological messages do that in droves. One minute you are laughing at the statue of his “Angel of the North” – a chav stumbling home after a night out – to a feeling of self loathing. Let’s face it the stark white canvas of two little African boys out in the wilderness with one of them wearing a t-shirt that reads “I hate Mondays” should leave us all feeling disgusted with ourselves for complaining about our Monday mornings.

By also placing small exhibits subtly amongst the regular features, BANKSY has compelled visitors to examine every piece in the museum, as if on a bizarre treasure hunt to find the hidden items. Screams of joy and giggles of delight echo the halls as a rat is discovered here or a porcelain dish that doesn’t belong there. Confusion also takes hold as sometimes it becomes hard to determine what is a BANKSY piece since it has been observed that many past artists have produced some strange works.

Of course no exhibit of BANKSY’s would be complete without his trademark juxtaposed riot police, whether they are skipping through the field or sitting astride a child’s rocking horse.

The exhibition offers BANKSY the perfect forum to make his point uniquely through the use of animatronics whilst poking fun at classic paintings, with his own bizarre interpretations. The make up wearing rabbit and the sleeping leopard skin point an accusing finger at human decadent cruelty, whilst his budget version of Lucas van Uden’s Flight into Egypt and one of Jean Millet’s “Gleaners” taking a cigarette break, leaves one chuckling away to oneself. Through his work BANKSY also displays an excellent quality of education.

You might laugh at the sight of Michael Angelo’s Statue of David dressed as a suicide bomber yet sadly few people may appreciate what is being said here. Unless you have an understanding of religion you might miss the oxymoron of the statue of Buddha sporting a black eye and blood stained knuckles. Sadly the latter provoked anger from an anonymous self proclaimed Buddhist who in mimicking BANKSY’s rebellious antics sprayed the words “Wansky Buddha Defiler”. Aside from the bad spelling the tagger clearly did not appreciate that Buddhists more than anyone would find the statue of a bruised Buddha amusing.

With over 600,000 visitors and counting having piled into the museum, BANKSY is without a doubt the most influential artist of the century so far. Damien Hirst and Tracey Emin cannot hold a candle to this local boy made good (or bad depending on your point of view). He has inspired a young generation, through what is really seen as an act of vandalism, to get excited about and question the nature of art.

Email ThisBlogThis!Share to TwitterShare to FacebookShare to Pinterest
Labels: Arts and Culture, Reviews