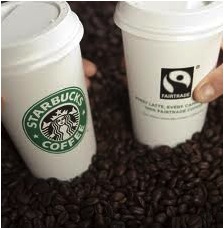 After the ideological fisticuffs between the fair trade proponent and champion of liberalised trade it was time for the businesses and the politicians to have their say (click here to read about how that debate panned out).
The debate on the issue of consumer choice and its benefits for the Developing World saw one argument that fair trade restricts free trade which disadvantages other farmers and that fewer restrictions on trade will help developing countries rise out of poverty. However free trade should also include fair trade encouraging businesses and the shopping public to purchase responsibly.
For Starbucks, the coffee house giant whose products are sourced from practically every country within the developing world the question from BBC’s Justin Rowlatt was simple; why it has taken so long for Starbucks to switch to Fair Trade considering it is such a powerful consumer tool.
It’s a Question of Quality
Colman Cuff, Director of Trading and Operations for Starbucks, refuted the company’s reportedly poor reputation for Fair Trade. He explained how Starbucks has maintained its own ethical trading program known as The Cafe Protection scheme to purchase quality coffee from an assortment of cooperatives. The scheme has strong policies on ethical practices if breached result in the supplier being removed from the program. These are:
Mr Cuff insisted that Starbucks always intended to switch their coffee to Fair Trade however the quality had not met their standard. Through working the Fair Trade Foundation over ten years they have helped coffee growers to improve their yield and quality of their crop. Since 2004 Starbucks have opened up more farms in Rwanda and Kenya and by 2008 doubled their Fair Trade purchases. September 2009 saw all coffee sold by Starbucks in the UK and Ireland switched to Fair Trade, and Mr Cuff announced breaking news that from 1st March 2010 all coffee sold throughout Europe is completely Fair Trade.
Yet under intense questioning, Mr Cuff admitted that whilst they were committed on ethical sourcing of all that they do their primary focus has been on their largest market; coffee. Cocoa is the next focus with sugar to follow, although the Fair Trade Foundation’s Harriet Lamb reassured everyone that the ingredients of the complimentary brownies were completely Fair Trade. Despite this, there was a sense of scepticism since quality Fair Trade sugar and cocoa is already widely available, why not use them?
Politics and Fair Trade
In anticipation of looming elections providing the opportunity to address the issue of Fair Trade to the politicians, New Statesman invited Secretary of State for International Trade, Gareth Thomas MP and his opposite number in the Conservative Party Mr Andrew Mitchell MP. Both advocated a strong support for Fair Trade and faith in purchase power. “Consumers can make a difference.” Mr Thomas stated “They have to make a difference. In the end the long term route of poverty for developing countries is through trade.” To demonstrate our government’s seriousness on ethical trading they have challenged the supermarkets to address the issue by doubling the amount of goods ethically sourced from developing countries. They also invested £12 million to the Fair Trade Foundation to expand the range of products.
Mr Mitchell however stressed that t has always been a conservative point to “Use your purchasing power to send a signal to the market.” Mr Mitchell explained how many conservative members from shadow cabinet to grassroots level travel to Rwanda and help in development projects such as health and education in tribal sectors. The issue of Fair Trade however is strongest felt for Conservatives are in areas that are least discussed such as cotton.
Both MP’s echo Mr Littlewoods call for an end to subsidisation of affluent producers and tariff barriers that would enable free and fair trade. They also agree on a need for fair trade to include the establishment of a developmental and supportive infrastructure prioritising education, health and welfare to enabling communities to grow. They argued that Pakistan and Mali, the world’s biggest producers of cotton, might trade fairly and freely out of poverty if such barriers were removed.
For Those Fair Trade Helps
It seemed as if these arguments have primarily been debated between the big organisations, politicians and academics but what about those affected by fair trade, or lack thereof? Speaking for the coffee growers was Carlos Alberto Vargas Leiton, CFO of Coopetarrazu, a Costa Rican non profit cooperative currently with over 2,600 farmers under its wing.

Mr Leiton explains how they are the biggest employers in the country and play a major part in all aspects of helping farmers increase yield and improve quality through sustainable organic farming and of course trade on an equal footing with the bigger organisations. This would not have been possible without Fair Trade.

In Africa, Fair Trade has helped over 5000 farmers in Ethiopia, and singing the foundations praises on behalf of his nation was Ambassador HE Berhanu Kebede.

“Fair Trade is sending the right signal to the international community. There should be no contradiction between fair trade and free trade.” 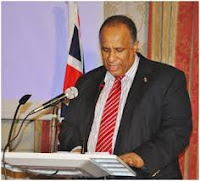 The Ambassador went on to explain how thousands of Ethiopian families benefit from fair trade, who are are able to send their children to school, provide clean water, sustain the environment and of course rebuild their communities. In this country’s harsh environment the ability to trade internationally is vital if the communities are to sustain themselves.
Whichever direction the punter prefers to swing it hasn’t deterred more big businesses from either appeasing their conscience or simply jumping on the bandwagon, as popular brands bear the Fair Trade foundations logo, certifying the manufacturer as a responsible and fair trader. The fair trade market however is growing with a wide range of products including fruit, wine, and olive oil from the West Bank.
Posted by Ramon Youseph at 14:38

Email ThisBlogThis!Share to TwitterShare to FacebookShare to Pinterest
Labels: Opinion