The Botonist situated at Berkeley Square Bristol (former home of Bar Ha Ha), which opened on Friday 8th April, bills itself as a pub. However  as my family and I stepped inside we were greeted with a very spacious modern bar. With it's laminated pine floor, airy feel, and a bar that appears exceptionally well stocked you get a sense that it is a mission to redefine the pub for the 21st Century. All semantics aside however, we were greeted by warm welcomes and smiling faces and invited to have drinks in the bar whilst they ensured our table was ready. 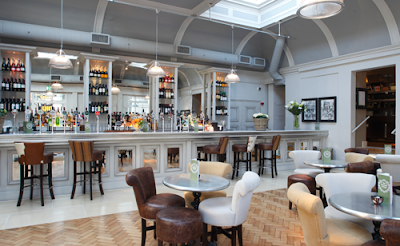 The bar area is very spacious, plenty of well spaced seating, the walls adorned with charcoal etched portraits of some of Bristol's famous landmarks.  Drinks consisted of traditional mojitos as well as a spiced mojito mixed with Sailor Jerry Rum, and all very reasonably priced at only £4.80 each. The mojitos were an absolute delight with the flavours perfectly balanced, leaving one with a delightful glow and a cleansed palate.


Drinks in hand we were escorted along the open kitchen and pass where the final touches were added to waiting to the dining area, resembling a rustic French farmhouse. The limed wood furniture, adorned with a small tin bucket of herbs and on the walls a selection wooden etchings, all screamed rustic which was then countered with a steel top covered dining table that looked as if it had suffered a few thwacks with a hammer.

Whilst the décor and the smells promised much in terms of a memorable dining experience it delivered a mixed bag ranging from unpleasant (bordering on unforgivable)  to heaven on a plate. The menu displayed an eclectic range of dishes from various regions, mostly European but predominantly Mediterranean in theme. 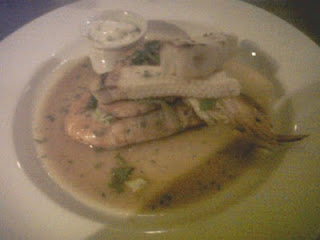 To start with I ordered the Gamba prawns with Rocket, Garlic Aoili and Rustic Bread.The prawns looked fabulous on the plate however I was disappointed to be presented with two very thin pieces of pale toasted bread. The whole complement was sitting on a  balsamic dressing with scattered bits of lemon rind. So many mistakes were made with this dish aside from the let down that was the so called rustic bread.

Although the prawns were sweet, succulent, and perfectly cooked they were unfortunately very gritty, an unforgivable sin. The rocket was diced thin and lacked flavour and whilst the dressing was very sharp and acidic enough for my taste, the average diner might find themselves gurnning with displeasure. Only the aoili survived my critical disdain. Some extra bread to mop up the remnants of the dressing was also absent.

A big disappointment to this sea food lover who would gladly have swapped dishes for the Potted Duck and Smoked Chicken or even the Dolcelatte and Pear Tart being enjoyed in front of me and which were raved about long after the meal was over. 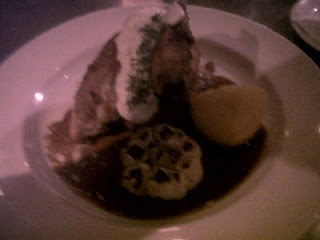 Onto the main course and my eye was instantly drawn to the Spit Roast / Stove choices on the menu and specifically the Spit chicken with Garlic, Lemon and Thyme and a side of Frites (crunchy fries for the less refined). Trying to shake the tragedy that was the prawn starter I prayed that the chicken wasn't too dry and that the frites were nicely moorish. I was presented with two juicy pieces of chicken made of breast, leg and wing with crispy skin, sitting in a sticky jus.

Sitting adjacent to the mouth watering inducing chicken was a whole roasted garlic bulb, a roasted lemon and on top of the chicken a lemon thyme topped creamy accompaniment. All memories of the starter were soon erased with the flavours of the tender moist chicken, and the sweetness of the garlic which combined with all the accompaniments made this a very dreamy dish.

The only disappointment was the measly apportioned side order of  Cabbage, Leeks and Peas whilst well cooked and buttery was under seasoned. The frites served separately however were perfectly cooked and would happily have worked through more portions. Also well received were perfectly cooked Rib Eye Steak, Hake Fillets with Chorizo Mash and the Piri Piri Chicken cooked on the spit.
Verdict

The staff were very inviting and enthusiastic in making sure all our needs were attended to although there was an absence of organisation which has hopefully since been ironed out. On the whole much of the dishes were of exceptional quality and well presented, although the awful memory of those gritty prawns are still hard to shake.  The main courses for some of us saved the day prompting calls for return visits to sample other dishes.

The Botanist is a few steps shy of fine dining but definitely not a pub. There is something on the menu for everyone and with the warm weather creeping up there is also the choice of alfresco dining with patio heaters to fight away any cold temperatures. It simply needs a little time to work out a few kinks and decide exactly what sort of eatery it wants to be.
Posted by Ramon Youseph at 23:42

Email ThisBlogThis!Share to TwitterShare to FacebookShare to Pinterest
Labels: Food and Drink, Reviews