Crowdopolis 2012: The World is Not Enough

The Daily Crowdsource's much anticipated crowdsourcing event, Crowdopolis was held on 19th July 2012 in Los Angeles. It was aimed at companies looking to learn more about crowdsourcing and how to incorporate it into their daily operations. The event featured break out sessions looking at practical uses and guides as well as networking opportunities, and guest speakers from various companies and crowdsourcing service providers. The Gazette is honoured to feature the insights and observations on this event by guest blogger Ville Miettinen,co-founder  and CEO of Microtask.

Until recently, no one would have thought to turn to James Bond for lessons on the future of industrialised society or how to cure cancer. 007 is a talented fellow, but not someone we would have associated with forecasting economic transitions or the science of cancer. (Q and his team of R&D experts on the other hand…) That all changed at Crowdopolis, 2012. Presentations by Lisa Kennedy, James Rubinstein and Professor David Alan Grier revealed that when it comes to crowdsourcing, even absurd movie stars have insights that can help solve the world’s problems. (Confirming once again the ideas expressed in Team America: World Police.) 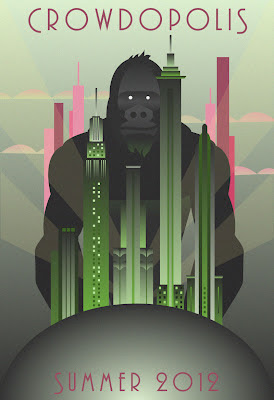 As you might have guessed by now, Crowdopolis this year was a fascinating event, with an impressive line-up from the crowdsourcing industry and associated experts. In total 16 different speakers gave presentations, focused on lessons learnt from their experiences with crowdsourcing projects. I was delighted to be amongst them.
Lessons learnt using moles to crowdsource 4 million tasks

If you have ever had anything to do with moles, you will know that they are not very good at reading old newspapers. In fact, with their terrible eyesight and poor attention to detail, moles are the last animal you should ask to help digitise hard-to-read newspaper text. Yet, as I discussed at Crowdopolis, moles – or at least video games involving them – were extremely good at encouraging volunteers to donate their time to help the National Library of Finland digitise its old newspapers. The project, called Digitalkoot, has so far involved over 100,000 volunteers, demonstrated the power of crowdsourcing when combined with gamification, and proved that you can never have too many buzzwords in one sentence.
Innovation and enterprise
From the people I spoke to and the talks I attended, I think the prevailing theme this year was the potential crowdsourcing has for innovation and larger enterprises. Sharon Chiarella from Amazon and Kirsten Kuehl from Nokia both focused on this, and gave some real insights into how big business can benefit from the crowd’s creativity. As I mentioned during my presentation, in the future I believe we will increasingly see larger corporations making use of the crowd for jobs that can be broken down into microtasks and completed online.
Judging by the buzz during the event, I think everyone enjoyed themselves as much as I did, and came away with new ideas about the future of our fledgling industry. One thing was certain: If you are involved in the crowdsourcing industry Crowdopolis 2013 should be on your calendar.

Ville Miettinen is a serial entrepreneur and computer programmer from Finland, and is the co-founder and CEO of Microtask, a platform that incorporates crowdsourcing as a means of carrying out various tasks online. Since it was founded in 2009 it has grown into one of the leading providers of on-line crowdsourced labour with offices in Helsinki and Tampere, as well as San Francisco. Ville also offers his thoughts and knowledge on crowdsourcing as one of the Crowd Leaders for The Daily Crowdsource.

Image Credit; The Daily Crowdsource - All Rights Reserved
Posted by Ramon Youseph at 00:00