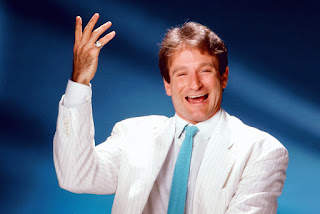 In the film Dead Poets Society written by Tom Schulman teacher John Keating (Robin Williams in what I feel was his best role) attempts to save his class of young aspirants from a life of mediocrity by inspiring them to think for themselves. In it he quotes from Walt Whitman; "O me! O life!... of the questions of these recurring; of the endless trains of the faithless... of cities filled with the foolish; what good amid these, O me, O life?" Answer. That you are here - that life exists, and identity; that the powerful play goes on and you may contribute a verse. That the powerful play *goes on* and you may contribute a verse. What will your verse be?" In answer to Keating's question Williams has contributed extraordinary verses to the powerful play lighting up the screen and our lives with his emotionally charged performances as an actor and his boundless frenetic energy as a comedian. His body of work is immense and although some could rightfully be buried in the landfill of awful forgettable movies (Cadillac Man, Hook) Williams' legacy is a plethora of incredible performances all of which deserved a nod from his peers.

When Robin Williams debuted as visiting alien Mork on the show Happy Days little did anyone, including Williams himself realise it would open the door to an illustrious and varied career with standout performances gracing the stage and screen (small and large). The show Mork and Mindy made Williams a household name serving as a platform for his brand of frantic improvisation. and zany riffs that became his trademark. Few will recall his earlier film roles, that of writer T.S. Garp in The World According to Garp and his particularly touching role of the defecting Russian musician in Paul Mazursky's seminal comedy Moscow on The Hudson. Both films ironically deal with characters who are trying to find their place in the world, Garp trying to find his own identity in the shadow of his mother's accomplishments (brilliant performance by Glen Close) whilst Vladimir Ivanoff struggles to build his new life in the promised land (New York). Both these roles echoed Williams' search for his own place in the world as an actor, family man all the while battling his own addictive demons. After his notable performance in Moscow on The Hudson Williams seemed to drift into a string of forgettable roles but caught the public's eye with his incredible stand up routine that was filmed and released as Robin Williams Live at The Met (1986). Williams' electric and thoughtful performance at the New York Metropolitan Opera House helped to leave his Mork persona firmly in the past with a set that featured his hilarious views on world politics (suggesting Gorbachev and Reagan hold a summit in a mafia-run clam bar) to his poignant and frank discussions about his battles with drugs and alcohol.
Finally Williams made his breakthrough as loud mouthed war time DJ Adrian Cronauer in Good Morning Vietnam. The film served to showcase Williams' incredible talent at improvisation with much of Cronauer's anarchic dialogue, including his radio set, ad-libbed by Williams. Yet this never detracted from the film and the character's moral message about the futility of the Vietnam War and the ethics of news censorship. An emotionally charged and energetic performance garnered talks of Oscar glory. The following year Williams brought poise, thought  and emotion combined with what had become his signatory ad-libbing and impressions to prep school teacher John Keating in Dead Poet's Society inspiring his students to lead extraordinary lives. It was however an unusually reserved performance by Williams with none of the the madcap traits for which he was best known. Nevertheless his performance was praised highly and once again there was talk of Oscar glory but again with no award in sight. In hindsight however, these two praiseworthy performances were the catalyst for Williams future roles and the following decade would prove to be his busiest with a line up of varied and memorable performances, as well as that much earned recognition from the industry.
The term "jobbing actor" could rightly apply to Williams as he found himself working with some of the greatest directors in Hollywood such as Gus Van Sant (Good Will Hunting) and Francis Ford Coppola (Jack), in a vast array of roles. These include the memorable Genie in Disney's animated flick Aladdin and of course everyone's favourite Mrs Doubtfire as the down and out actor going to desperate lengths to spend time with his children. Although his first outing with director Barry Levinson in the eighties gave us the funny and highly charged Good Morning Vietnam, subsequent collaborations the following decade spawned the disappointments that were Cadillac Man and Toys. Williams' partnership with Chris Columbus ushered in one of his most famous roles in Mrs Doubtfire and a like-able cameo in the awful Nine Months. It also produced the disappointing Bicentennial Man.  This pattern of peaks and troughs dominated much of his work to follow but the crowning achievement came in 1998 when he finally won his Oscar as best supporting actor for Good Will Hunting. Yet the films that defined this decade surely must have been as the homeless former professor Parry in Terry Guilliam's The Fisher King and as Dr Malcolm Sayer searching for that medical miracle to revive his catatonic patients in Awakenings. The Fisher King showcased the depth of range of Williams the character actor as he brought to life the madcap imagination and deeply painful tragedy of Parry. It is hard not to be moved to tears when Parry re-lives the most painful day of his life, surely worthy of an Oscar just for that moment alone. For Malcolm Sayer Williams discarded his clownish improvisation antics playing it straight in this story based on the works of Oliver Sachs MD. Although it was a more reserved performance from Williams it was still a multi-dimensional one even coming close to outshining his legendary co-star Robert De Niro.
The nineties was Williams' busiest decade to date filled with his most memorable roles for a wide array of audiences. Although many film roles came and went it was fitting and a relief that he closed the decade and the century with the heart wrenching Jakob The Liar. Over the last ten years Williams' roles have failed to live up to the breadth of achievement that defined his career, the exception being his villainous turns in One Hour Photo and Insomnia. Audiences were clearly not used to seeing the much darker side of Williams but it was a brave tmove nonetheless and and cemented his reputation as one of moviedoms finest character actors. Despite his subsequent work never quite reaching the same levels of notable success Williams remained a visible and busy performer, lighting up even dull projects such as Night at The Museum and its sequel as well as the abysmal RV: Runaway Vacation.

Throughout his career Robin Williams has notched up countless performances, too many to list and some of which we'd like to forget. Yet there was no doubting the depth of this man's talent. As an actor he tapped into the deepest heartfelt and sometimes darkest recesses of his soul making us laugh, cry and want to reach for the stars in equal measure. Williams the comedian exuded the kind of uncontrollable energy that captivated and delighted audiences the world over. He was by no means a perfect individual with his personal life dogged by two failed marriages and spells with alcohol and drugs. These were symptomatic however of a man battling his darkest demons, and within the Williams the performer was always masked a sadness that was certainly noticeable to me. He was however a bright light on stage and screen, touching the lives of those who called him friend and family along with millions around the world. .Sadly the light that burns twice as bright burns for half as long, and Robin Williams has burned so very very brightly. Now that light has been extinguished.

Email ThisBlogThis!Share to TwitterShare to FacebookShare to Pinterest
Labels: News