The UK general election is six months away but already the political parties are stepping up their campaigns to vie for the public vote. The Green Party have turned to crowdfunding to raise funds for prospective candidates and raise more awareness of their policies. The Greens, deemed the only left leaning political party in the UK, have signed up with London & Cornwall based Crowdfunder raise the sum of £500 for each of their parliamentary candidates who will stand in the May 2015 general election.

The Green Party are no strangers to the unending fight in getting their message across. Currently at odds with the television outlets (mainly the BBC) for not including their leader Natalie Bennett in the televised election debates, the party is determined to increase their drive to get as many parliamentary candidates as possible to run in the upcoming election. This has already proven to be successful in Plymouth where party member Lauren Packham sought the £500 deposit needed to stand as an MP, through Crowdfunder. The campaign was a huge success with nearly £2,500 collected. The funding target, with only 7 days remaining, has since been extended to £3,000 to help meet print and online advertising costs as well as distribution of promotional flyers. 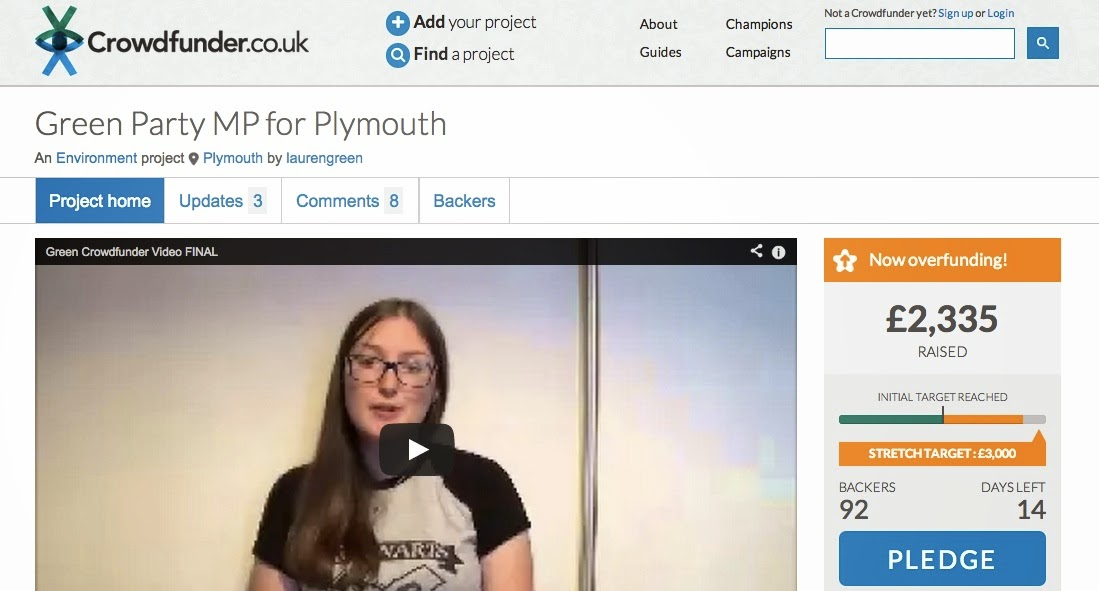 Media coverage of the party has been minimal with much of attention diverted to the rise of the far right party UKIP. With the ongoing battle to be feature regularly on the BBC (who appear to favour coverage of UKIP), using Crowdfunder to raise the deposit also helps to promote more awareness of their policies which not only include addressing environmental concerns but also to provide a real left leaning alternative, once the monocle of the Labour party. To ensure that they make an impact, the Green Party has pledged to stand in at least 75% constituencies in 2015. This will allow 50% more people to vote Green at the coming General Election than were able to in 2010.

The Green surge in membership and polling demonstrates that more and more people are interested in Green values and policies and are prepared to vote Green at the 2015 General Election. Working with Crowdfunder allows the Green Party, which, unlike other parties, does not receive large corporate donations, to raise the money necessary to stand more candidates than ever before and potentially boost our representation in Parliament next year. - Tom Beckett, Fundraising and Operations Director.
The campaign for Lauren Packham continues, offering supporters a variety of rewards from acknowledgements on the Green Party website and social media, to ethically produced Green Party silicone wristbands along with signed prints of the party's prominent figures, leader Natalie Bennett and Brighton & Hove MP Caroline Lucas. An opportunity to meet and greet the candidate has already been fully backed with three donors securing the opportunity to meet Plymouth's potentially first Green MP. For more information about the campaign and to pledge support visit Lauren Packham's Crowdfunder page.
Posted by Ramon Youseph at 05:00