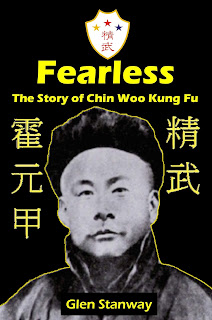 It is important to know when talking about the history and evolution of Chinese Kung-Fu one cannot do so without mentioning the internationally renowned Chin Woo School and its founder the legendary Huo Yuanjia. Whilst this incredible story has featured in many popular films and television shows few historical accounts have been readily accessible outside the Chin Woo Association. Glen Stanway’s seminal work rectifies this problem with the added bonus of covering the whole of the phenomenon that is Chin Woo with a nice personal touch.

Published in January 2013 “Fearless; The Story of Chin Woo Kung-Fu” is complete overview of the school’s history, training techniques and philosophy. The book comprehensively covers the complete story of Chin Woo in the context of its socio political circumstances, its place in the history of Kung-Fu, and how it changed the life of its author Glen Stanway.  A martial artist for over 20 years Glen is a 5th Dan (Wu Duan Wei) Chin Woo Wushu Master. He currently teaches Northern Shaolin Chin Woo at the GMAX academy in Royston, Cambridgeshire, along with San Shou (Chinese Kickboxing) and gymnastics.

It is ironic that the most detailed book on the Chin Woo gospel, a quintessentially Chinese institution that came about when Chinese national pride and culture was under threat, should be written with such affection by an Englishman. Chin Woo was born out of a need to restore unity and was on the front lines in the fight to reclaim national pride, a charge led by the school's founder Huo Yuanjia.  Yet the book is more than just a historical record or a techniques guide, but in fact a comprehensive look at this institutional phenomenon interspersed with the author’s own personal journey.

Learning about how Kung-Fu profoundly changed Glen's life adds some extra dimensions to this fascinating history. His transformation after a car accident to full health mirrors the story of Huo Yuanjia himself. It is a recurring theme of notable martial arts innovators, such as Morihei Ueshiba – founder of Aikido. Huo Yuanjia was quite a sickly child and it was the practice of martial arts practice that gave him his strength. This makes for a visceral and inspiring story reminding us that martial arts is a more than just a fighting system but a way of life, a journey in fact and learning about Chin Woo alongside Glen’s martial development greatly emphasis that ideal of a martial way of life.

Huo Yuanjia – The Man The Myth

With so many stories floating around about the formation of Chin Woo, and Huo Yuanjia, both have become the stuff of legends, making it difficult to separate fact from fiction. Everything from the role of the school in igniting the Chinese revolution to Huo Yuanjia’s incredible David vs Goliath battles have been portrayed and mythologised to some extent from Bruce Lee’s “Fist of Fury” to Jet Li’s “Fearless”. Glen doesn’t shy away in tackling this subject but what makes his approach a more evocative read is his examination into their commonalty in the message they both convey.

In his devotion to the school Glen separates fact from fiction but rather than admonish these myths Glen refreshingly presents them as embodying Chin Woo values. It is in both that Glen invokes the sort of fascination and respectful deserving of an institution integral to evolution of modern martial arts training and techniques.

“Fearless” is more than just a historical record or personal journey but more of a complete set of work in one book. Glen doesn’t just examine the history of Chin Woo he provides a thorough guide to the history and basics of Chinese Kung Fu from styles to meditative practices. With such a vast history to encapsulate in one book, Glen has managed the intricate balance of summary and relevant detail making it ideal for the novice looking to learn all about Kung-Fu. This overview also places Chin Woo in the much larger historical perspective so that we can see its influence in modern Kung-Fu. This sort of dwarfs the chapters that examine Chin Woo techniques, weapons and forms but doesn’t detract in giving readers interested in method a real taste of art's varied and dynamic distinctions.

All in all “Fearless; the story of Chin Woo Kung-Fu” is a complete work with something for everyone, be it the personal story of how Chin Woo changed its author’s life, to delving into its history and the intricacies of practice - a one stop reference of fascinating history and inspiration of the school and its founders impact on modern martial arts practice and philosophy.