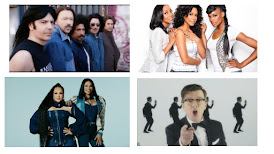 Get your leg warmers out of mothballs and dust off your shoulder pads; it's time for a funky trip back in time to the decade of big ambition and even bigger hair. This nostalgic musical adventure comes courtesy of the quintessential boy band New Kids On The Block, R & B trio En Vogue, and Britain's favourite crooner and 80s heart throb Rick Astley, perfectly seasoned with hip hop duo Salt N' Pepa. 'Bring Back The Time' is an upbeat feel good song paying homage to the best of 80s music and for these quartet of musical legends it is an affectionate tribute to the era in which they flourished.
As usual I find myself a little late to the party since 'Bring Back The Time' premiered
on March 3rd, and to rave reviews. However I'm here now and as a former 80s teen I've found a new aural addition that has a distinctively delightful retro sound and feel. It is an unlikely musical collaboration that no one asked for yet one for which we are ultimately grateful . The harmonious mix of of this diverse range of vocals performed over the fast funky beat sampling of Michael Sembello's 'Maniac' invokes the feel good upbeat sense of fun of that decade with lyrics that are a little cheesy but nonetheless heartfelt. In fact the genius of the song is its lyrics specifically aimed at 80s children like myself pulling at the heartstrings with lines like 'The heart it never changes, inside we're still the same kids we were back in 89."  There's really no better way to revisit that decade than through a reflective yet fun track. Listening to old songs and watching old clips and videos of our favourites artists can take us back, but 'Bring Back The Time' is the musical equivalent of old friends reminiscing about their youth making it a bit more emotionally charged. If you think the journey ends there then you are mistaken.
The video accompanying the song takes all its elements and turns them up all the way to 11 with the four legendary ensemble recreating some of our favourite acts and images. From rockers Journey and Twisted Sister, to Robert Palmer, new romantics Duran Duran, and wild punk man Billy Idol, many are present and accounted for. There's so much to love about this video including the fabulous duo 'Salt N Pepa' recreating the noir feel of 'Vogue' and my personal favourite Rick Astley recreating the Talking Heads video for 'Once in A Lifetime'. Astley's resemblance and mimicking of David Byrne is so uncanny you almost wish he would record his own version of that classic track. What shines through from both the track and video is the genuine sense of fun it exudes. It all comes together poking a little fun of some of our favourite acts but doing so with a lot of love.
'Bring the Back The Time' is a joy laden cheesy pop tune with a retro 80s feel and added with a little reflective modern touch. Generations young and old will enjoy its infectious and lively beat but it'll be us middle aged folk who were there when these pop legends were new that'll enjoy it most. Its reminiscing lyrics, affectionate homage and all too familiar sound will have us longing to travel back to that golden age. With the release of the track and the upcoming US tour featuring all four acts billed as 'The Mix Tape Tour' legions of aged 80s kids will be screaming to 'Bring Back The Time.'
Posted by Ramon Youseph at 05:36

Email ThisBlogThis!Share to TwitterShare to FacebookShare to Pinterest
Labels: Arts and Culture